Harvest and production take place in the province of Trapani in Western Sicily in a district, mainly hilly, where lies Belìce river.

In the place where the river flows into, nearby Selinunte, happen the plantation of the olive tree and production of oil since there was the settlement of the first populations of Sicani, Elimi, Phoenician and Greeks, proved by ancient mills discovered near temples of the V century a.C. 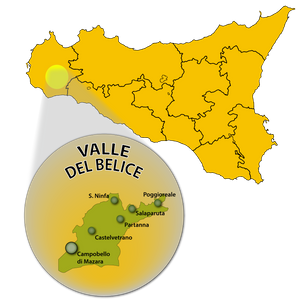 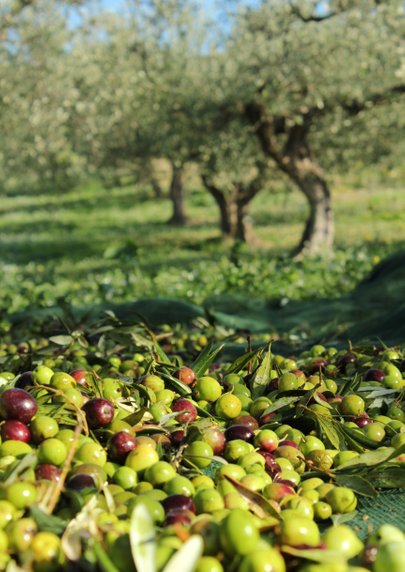 In Belìce Valley in Sicily (in the towns of Castelvetrano, Campobello di Mazara, Partanna, Santa Ninfa, Poggioreale and Salaparuta) is produced one of the best olive oil, whose the main ingredient is the Cultivar Nocellara del Belice. 97% of olive’s plants are of the variety Nocellara del Belice, a cultivar of moderate development, with branchs that have leaning fruits, self incompatible, with constant productivity; a big fruit (whose size ranges from 5 to 7 grams) with a spherical shape, a solid and crisp flesh, a deep – green colour before the veraison that ripening takes on a wine-red hue. The flesh represents on average for 85% of drupe, the oil yield is around 18 - 20 %, the quality is excellent; for this reason it’s used for a dual purpose (table and oil). This kind of variety prefers fresh and melted fields, even if manage to give satisfying productions in soil conditions which are not optimal.

The resistance to the main illnesses is moderate; indeed, Nocellara del Belice is susceptible to the Peacock Eye, Cercospora, Verticillium, scab and attacks of the flies. The remaining 3% of the plants is represented by the cultivar Buscionetto, Giarraffa, Cerasuola or Palermitana.

Their only one purpose is to pollinate Nocellara del Belice, exclusive of Cerasuola, since it is androsterile.